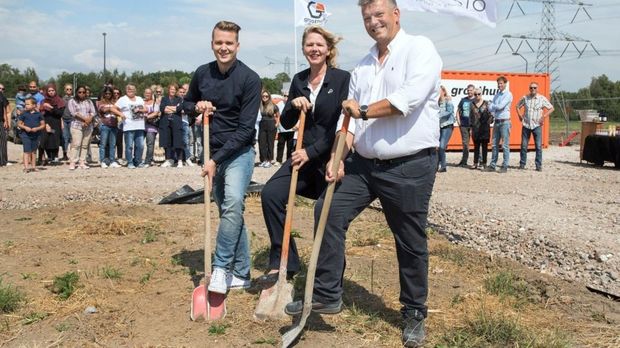 The industrial estate between the A6 and the Lage Vaart has only been called Zuiderpark for a few weeks and the construction of a new business building has already been completed. Together with alderman Sparreboom of economic affairs and project leader Christiaan van Ommeren of Groothuis Bouwgroep, the directors Michael Hendriks and Roy van Voorst of BModesto are putting the first shovel in the ground. The new premises of the pharmaceutical wholesaler are expected to be ready this year.

BModesto’s new building covers an area of ​​over 3000m2, three times the size of the current building on Artemisweg. Director Hendriks is proud: “Four years ago I started this company on my own. My uncle (Roy van Voorst) came to reinforce me in 2016. He and his wife were employees nine and ten. And now, just two years later, our family business employs 50 people and we continue to grow.” Alderman Sparreboom is also happy with the expansion of BModesto: “Of course we encourage companies to to settle in Lelystad, but an expansion of our current entrepreneurs is just as valuable.”

The start of construction comes just a few weeks after the business park was given a new name. The area was first part of Flevopoort, but is now called Zuiderpark. Sparreboom explains: “The name change is an initiative of Bedrijfskring Lelystad, which had the wish to position this area differently. The municipality has gone along with this.
Because of its location between the A6 and the Lage Vaart, the business park is an area in itself. It is the wish to have a second and direct access to Zuiderpark in 2020 to be given via the 3rd exit to be constructed from the A6 to Lelystad Airport.

The municipality examines the possibilities of this. Sparreboom: “That is of course extremely interesting for entrepreneurs, just like the logistics developments around Inditex and Lelystad Airport that Zuiderpark can benefit from.” Director Roy van Voorst adds: “That accessibility certainly played a role in the decision to build here, but what makes this location especially interesting for us is its accessibility from the city. Ideal for our employees, whom are mainly from Lelystad.”

When choosing the location, BModesto had a lot of help from the municipality. Van Voorst: “They actively searched with us and quickly came up with this lot. “That thinking along and helping is very pleasant for an entrepreneur and characterizes Lelystad”. The constructive attitude of the municipality is underlined by Christiaan van Ommeren, project leader of construction group Groothuis: “Through the efficient and informal contact with the municipality, things get done quickly in Lelystad”. Groothuis Bouwgroep, which takes care of the construction as well as is responsible for the design, has been active in Lelystad for some time. They have previously built for Vlint, Uxem Foams and Van Peperzeel. The construction company from Genemuiden therefore has Flevoland as its focus area. Van Ommeren: “Work in the sector has come to a standstill here for many years, but since the beginning of 2017 a lot has been happening in the polder.”

The lot on which the new BModesto building will be located is still bare. A couple of building chains, a flag of Groothuis Bouwgroep and one of the client adorn the site. The picket posts have now been knocked down and the pile driver can arrive any moment to drive 387 piles into the ground. Hendriks and van Voorst can’t wait for it to be completed: “With the new building we can take it again and we have room to grow.” When asked what the future holds bring: “We certainly do not exclude a step towards the international marketing of our products.”

BModesto supplies medicines to hospitals and pharmacies. They specialize in the so-called parallel import, whereby products are purchased abroad and are further developed and marketed according to Dutch standards, such as the addition of Dutch information leaflets and labels.